In this blog post, we will walk you through the EC2 forensic module factory solution to deploy automation to build forensic kernel modules that are required for Amazon Elastic Compute Cloud (Amazon EC2) incident response automation.

When an EC2 instance is suspected to have been compromised, it’s strongly recommended to investigate what happened to the instance. You should look for activities such as:

When an EC2 instance is compromised, it’s important to take action as quickly as possible. Before you shut down the EC2 instance, you first need to capture the contents of its volatile memory (RAM) in a memory dump because it contains the instance’s in-progress operations. This is key in determining the root cause of compromise.

This solution has the following prerequisites:

You can deploy the EC2 forensic module factory solution by using either the AWS Management Console or the AWS Cloud Development Kit (AWS CDK).

Sign in to your preferred security tooling account in the AWS Management Console, and choose the following Launch Stack button to open the AWS CloudFormation console pre-loaded with the template for this solution. It will take approximately 10 minutes for the CloudFormation stack to complete.

Option 2: Deploy the solution by using the AWS CDK

You can find the latest code for the EC2 forensic module factory solution in the ec2-forensic-module-factory GitHub repository, where you can also contribute to the sample code. For instructions and more information on using the AWS CDK, see Get Started with AWS CDK.

To deploy the solution by using the AWS CDK

Now that you’ve deployed the EC2 forensic module factory solution, you need to invoke the Step Functions workflow in order to create the forensic kernel objects. The following is an example of manually invoking the workflow, to help you understand what actions are being performed. These actions can also be integrated and automated with an EC2 incident response solution. 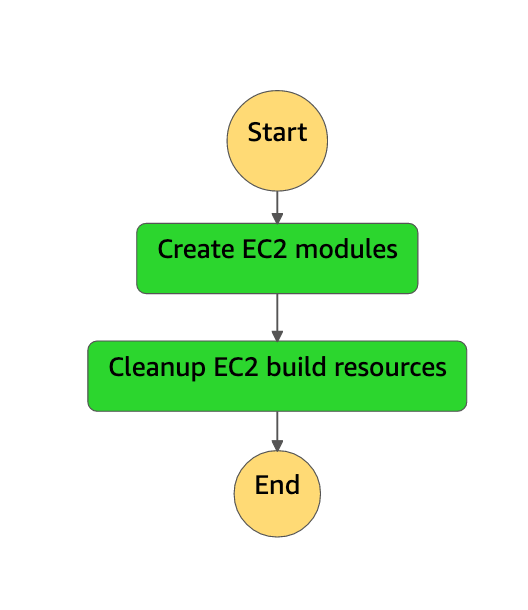 To verify that the artifacts are built

Now that the objects have been created, the solution has successfully completed.

Each organization has specific requirements for allowing application teams to use various EC2 AMIs, and organizations commonly implement an EC2 image pipeline using tools like EC2 Image Builder. EC2 Image Builder uses recipes to install and configure required components in the AMI before application teams can launch EC2 instances in their environment.

The EC2 forensic module factory solution we implemented here makes use of an existing EC2 instance AMI. As mentioned, the solution uses an SSM document to create forensic modules. The logic in the SSM document could be incorporated into your EC2 image pipeline to create the forensic modules and store them in an S3 bucket. S3 also allows additional layers of protection such as enforcing default bucket encryption with an AWS Key Management Service Customer Managed Key (CMK), verifying S3 object integrity with checksum, S3 Object Lock, and restrictive S3 bucket policies. These protections can help you to ensure that your forensic modules have not been modified and are only accessible by authorized entities.

It is important to note that incorporating forensic module creation into an EC2 AMI pipeline will build forensic modules for the specific kernel version used in that AMI. You would still need to employ this EC2 forensic module solution to build a specific forensic module version if it is missing from the S3 bucket where you are creating and storing these forensic modules. The need to do this can arise if the EC2 instance is updated after the initial creation of the AMI.

There are many existing solutions to automate incident response workflow for quarantining and capturing forensic evidence for EC2 instances, but the majority of EC2 incident response automation solutions have a single dependency in common, which is the use of specific forensic modules for the target EC2 instance kernel version. The EC2 forensic module factory solution in this post enables you to be both proactive and reactive when building forensic kernel modules for your EC2 instances.

You can use the EC2 forensic module factory solution in two different ways:

Now that you have the kernel modules, you can both capture the volatile memory by using LiME, and then conduct analysis on the memory dump by using a Volatility2 profile.

AWS has also released the Automated Forensics Orchestrator for Amazon EC2 solution that you can use to quickly set up and configure a dedicated forensics orchestration automation solution for your security teams. The Automated Forensics Orchestrator for Amazon EC2 allows you to capture and examine the data from EC2 instances and attached Amazon Elastic Block Store (Amazon EBS) volumes in your AWS environment. This data is collected as forensic evidence for analysis by the security team.

The SSM document pulls open-source packages to build tools for the specific Linux kernel version. You can update the SSM document to your specific requirements for forensic analysis, including expanding support for other operating systems, versions, and tools.

You can also update the S3 object naming convention and object tagging, to allow external solutions to reference and copy the appropriate kernel module versions to enable the forensic workflow.

If you deployed the EC2 forensic module factory solution by using the Launch Stack button in the AWS Management Console or the CloudFormation template ec2_module_factory_cfn, do the following to clean up:

If you deployed the solution by using the AWS CDK, run the following command.

In this blog post, we walked you through the deployment and use of the EC2 forensic module factory solution to use AWS Step Functions, AWS Lambda, AWS Systems Manager, and Amazon EC2 to create specific versions of forensic kernel modules for Amazon Linux EC2 instances.

The solution provides a framework to create the foundational components required in an EC2 incident response automation solution. You can customize the solution to your needs to fit into an existing EC2 automation, or you can deploy this solution in tandem with the Automated Forensics Orchestrator for Amazon EC2.