Moving Beyond Correlation in Clinical Practice


A
growing body of research suggests it’s time to abandon outdated ideas about how
to identify effective medical therapies.

“Correlation
is not causation.” It’s a truism that researchers take for granted, and for
good reason. The fact that event A is followed by event B doesn’t mean that A
caused B. An observational study of 1,000 adults, for example, that found those
taking high doses of vitamin C were less likely to develop lung cancer doesn’t
prove the nutrient protects against the cancer; it’s always possible that a
third factor — a confounding variable — was responsible for both A and B. In other
words, patients taking lots of vitamin C may be less likely to get lung cancer
because they are more health conscious than the average person, and therefore more
likely to avoid smoking, which in turn reduces their risk of the cancer.

As
this example illustrates, confounding variables are the possible contributing
factors that may mislead us into imagining a cause-and-effect relationship exists
when there isn’t one. It’s the reason interventional trials like the randomized
controlled trial (RCT) remain a more reliable way to determine causation than
observational studies. But it’s important to point out that in clinical
medicine, there are many treatment protocols in use that are not supported by
RCTs. Similarly, there are many risk factors associated with various diseases
but it’s often difficult to know for certain whether these risk factors are
actually contributing causes of said diseases.

While
RCTs remain the good standard in medicine, they can be impractical for a
variety of reasons: they are often very expensive to perform; an RCT that exposes
patients to potentially harmful risk factor and compares them to those who
aren’t would be unethical; most trials require many exclusion and inclusion
criteria that don’t exist in the everyday practice of medicine. For instance,
they usually exclude patients with co-existing conditions, which may distort
the study results.

One
way to address this problem is by accepting less than perfect evidence and using
a reliability scale or continuum to determine which treatments are worth using
and which are not. That scale might look something like this, with evidential
support growing stronger from left to right along the continuum:

In
the absence of RCTs, it’s feasible to consider using observational studies like
case/control and cohort trials to justify using a specific therapy. And while
such observational studies may still mislead because some confounding variables
have been overlooked, there are epidemiological criteria that strengthen the
weight given to these less than perfect studies:

While
adherence to all these criteria suggests causality for observational studies, a
statistical approach called causal
inference can actually establish causality. The technique, which was spearheaded by Judea Pearl, Ph.D., winner of the 2011 Turing Award, is considered
revolutionary by many thought leaders and will likely have profound
implications for clinical medicine, and for the role of AI and machine
learning. During the recent Mayo
Clinic Artificial Intelligence Symposium,
Adrian Keister, Ph.D., a senior data science analyst at Mayo Clinic, concluded
that causal inference is “possibly the most important advance in the scientific
method since the birth of modern statistics — maybe even more important than
that.”

Conceptually,
causal inference starts with the conversion of word-based statements into
mathematical statements, with the help of a few new operators. While that may
sound daunting to anyone not well-versed in statistics, it’s not much different
than the way we communicate by using the language of arithmetic. A statement
like fifteen times five equals seventy five is converted to 15 x 5 = 75. In
this case, x is an operator. The new mathematical language of causal inference
might look like this if it were to represent an observational study that evaluated
the association between a new drug and an increase in patients’ lifespan: P
(L|D) where P is probability, L, lifespan, D is the drug, and | is an operator
that means “conditioned on.”

An
interventional trial such as an RCT, on the other hand, would be written as X
causes Y if P (L|do (D)) > P(Y), in which case the do-operator
refers to the intervention, i.e., giving the drug in a controlled setting. This
formula is a way to of saying X (the drug being tested), causes Y (longer life)
if the results of the intervention are greater than the probability of a longer
life without administering the drug, in other words, the probability in the
placebo group, namely P(Y).

This innovative
technique also uses causal graphs to show the relationship of a confounding
variable to a proposed cause/effect relationship. Using this kind of graph, one
can illustrate how the tool applies in a real-world scenario. Consider the
relationship between smoking and lung cancer. For decades, statisticians and
policy makers argued about whether smoking causes the cancer because all the
evidence supporting the link was observational. The graph would look something
like this. 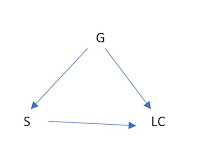 G is
the confounding variable — a genetic predisposition for example — S is smoking and
LC is lung cancer. The implication here is that if a third factor causes persons
to smoke and causes cancer, one cannot necessarily conclude that smoking causes
lung cancer.  What Pearl and his
associates discovered was that if an intermediate factor can be identified in
the pathway between smoking and cancer, it’s then possible to establish a cause/effect
relationship between the 2 with the help of a series of mathematical
calculations and a few algebraic rewrite tools. As figure 2 demonstrates, tar
deposits in the smokers’ lung are that intermediate factor.

Had
causal inference existed in the 1950s and 1960s, the argument by tobacco
industry lobbyists would have been refuted, which in turn might have saved many
millions of lives. The same approach holds tremendous potential as we begin to
apply it to predictive algorithms and other machine-learning based digital
tools.

Q&A with CIO Tanya Townsend: “We Need to Learn From Each Other and Lean on Each Other.”